This Wednesday, March 18 at Freddy’s :

7:30 – 101 Kaba Gajdi & Tupani NY (Bulgarian): A universe of drums and bagpipes pumping it up Bulgarian style 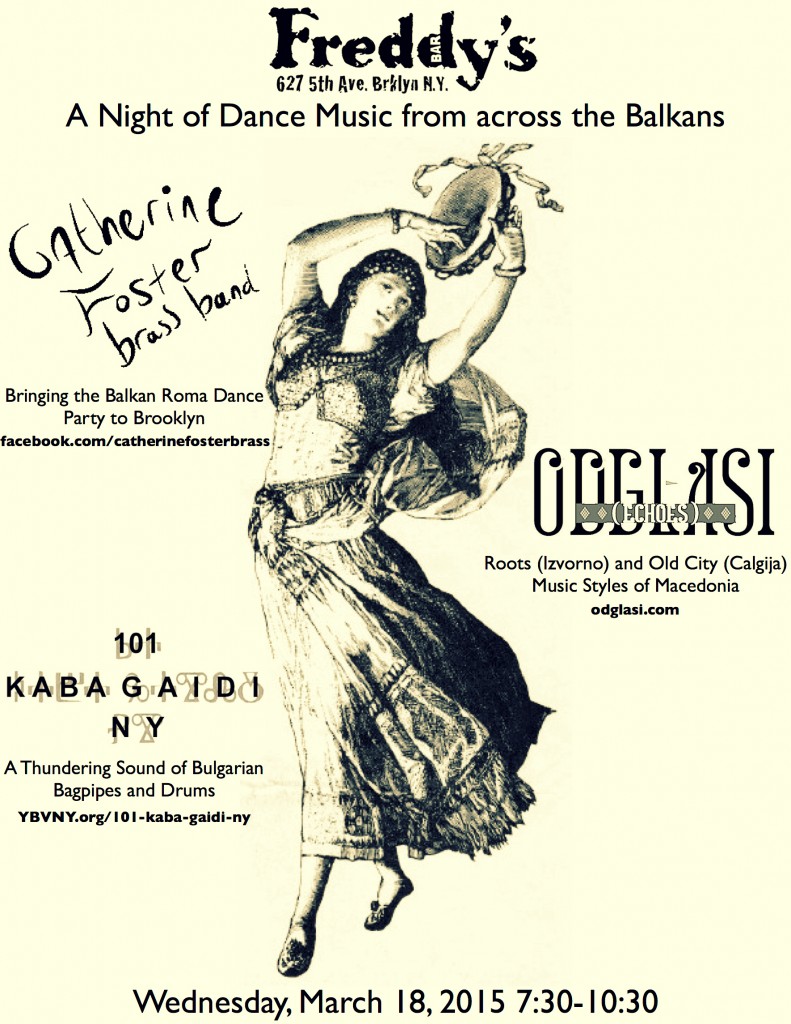 Join the  Bulgarian Tupan Class taught by Ivaylo Koutchev at Young Bulgarian Voices New York and 101 Kaba Gaidi New York!
Ivaylo Koutchev is a graduate of the Plovdiv Academy for Music and Dance, Bulgarian. Mr. Koutchev continued his professional path as a teacher of kaval (end-blown wooden flute) in the highly acclaimed Shiroka Luka Folk Music High School in Bulgaria. Equally masterful in tupan (bass drum of the Balkans), Mr. Koutchev has developed a unique style of presenting the traditional beats of Bulgarian folk music, for which he is highly regarded among his fellow musicians and students. Mr. Koutchev has taught and performed both kaval and tupan throughout Europe, Japan and the United States. Among Mr. Koutchev’s teaching engagements have been the weekly-long Balkan Music and Dance Workshops, organized by the East European Folklife Center in the US.
Currently Mr. Koutchev lives in New York City and performs Balkan music with different local groups.
“Ivaylo Koutchev is an outstanding performer whose presentation is of the highest quality. The workshop in music, which he held with the members of the Princeton University Folk Culture Club was a special personal experience for everyone who took part in. He was able in a few short hours to teach to Americans of non-Bulgarian heritage traditional music and specific uneven Bulgarian rhythms. It was unforgettable evening for all of us.” (A. R. President of the Center for Bulgarian Culture in America).

Our Spring Kaba Gaida class starts Sunday Jan 29. If you are interested and not a current member of the class, please fill out this form. ... See MoreSee Less

This information will only be used for YBVNY purposes and will not be shared. If you want your information removed just send us mail.
View on Facebook
· Share

Thanks from 101 Kaba Gaidi New York and Young Bulgarian Voices